I was aiming to get this update out last weekend, but I had to take in the festivities! I also needed to decompress and fully absorb the 2 weeks before I could write veraciously, though with some meaningful emotion. Here are my experiences, the highs and lows and naturally, the lesson of those 2 weeks...

As the Oslo 2016 World Championships came to a close last Sunday, I am left with a whole mixture of feelings. As always, Oslo delivered a spectacular competition atmosphere. Though this year was definitely exceptional with the World Championships! It's a historic venue to compete at and I was thrilled to be a part of the championships for my final season. 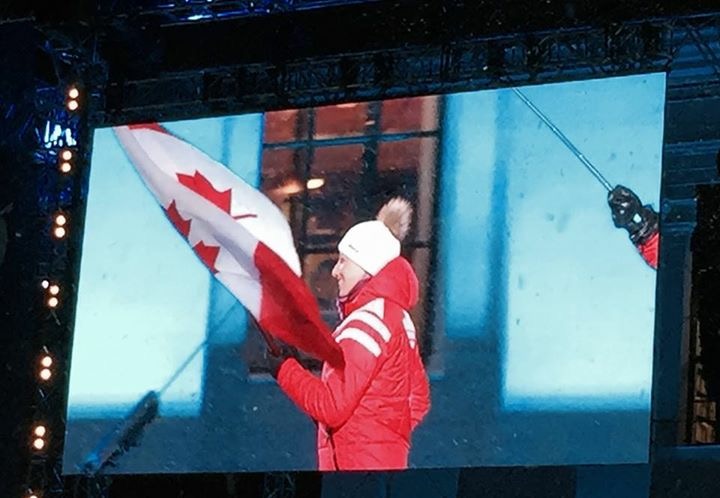 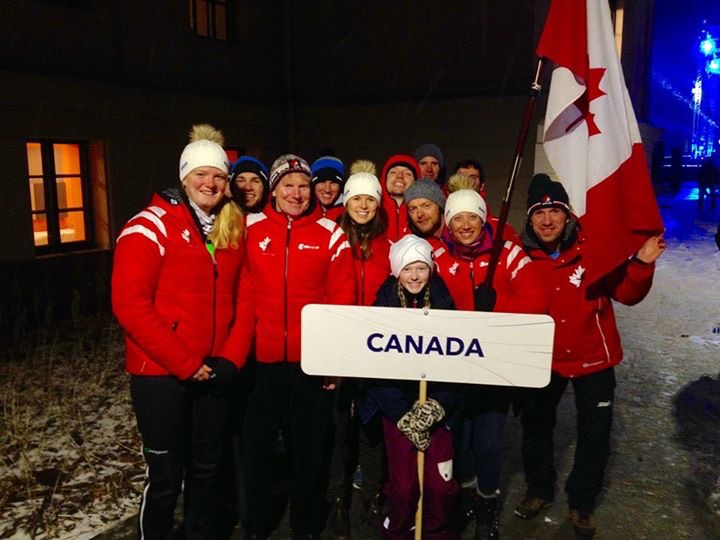 Leading our team with the Canadian flag through the Opening Ceremonies above a sea of thousands in downtown Oslo was a proud moment for my last championships. The stadium was stocked full of fans most days, especially on the final weekend with the Mass Start & Relay competitions. Not only in the stands, but hundreds also lined parts of the course, there were parties of families, of friends and of campers with lots of fires blazing and hot dogs roasting.

(spectating & cheering from atop our wax trailer!) 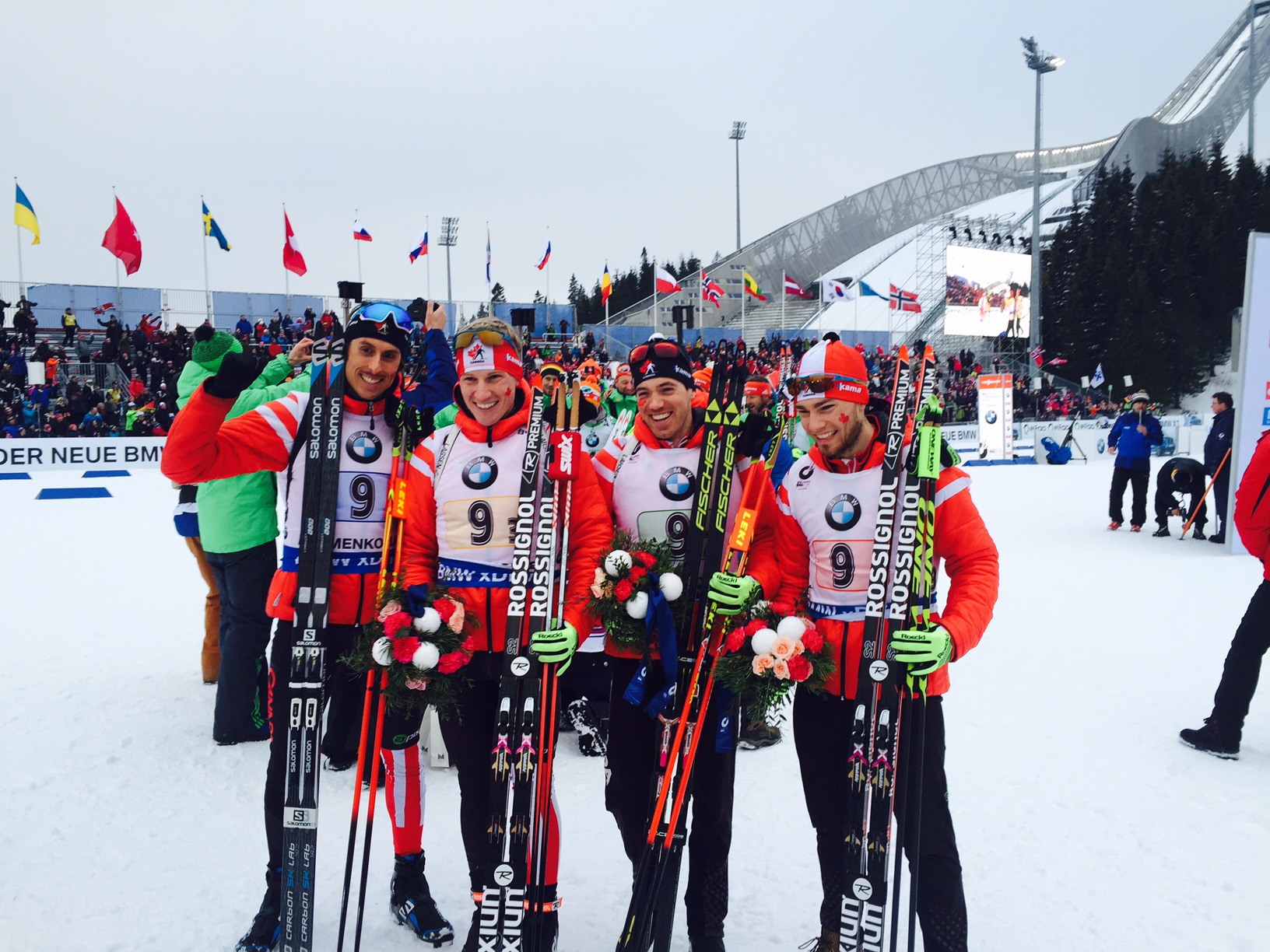 Of course, our team’s most exciting mmmmarvelous moment of the Championships was the men’s historic moment placing 3rd in the Relay! (you can still watch the replay of the relay on biathlonworld.com Totally still worth it even if you know the outcome now!) Our Men’s relay team totally meshed that day. All 4 of them were physically on fire; mentally very strong and focused in the range; our techs delivered with rockets under their feet; and thus the 4 guys harmonized an almost perfect race to make the podium. It was spectacular to watch it unfold and see the bar raised in our team. What we thought was always possible but hadn’t been achieved thus far. Everyone was in high spirits! We all ran down to the finish area to watch the flower ceremony and that evening took in the medal ceremony in downtown Oslo with thousands of spectators.

Ya busy day that was! I was out sledding with an old teammate & her 4 year old  (which was a RIOT), and we tore back to catch most of the race just in the nick of time to be thoroughly surprised. Let me get back to the sledding first… if you need something to do outside in Oslo besides Nordic skiing, do the sled run, Korketrekkeren (the cork screw) close to Holmenkollen. Take the tram past Holmenkollen to Frognerseteren, rent the fastest sled and race down the 2k track. Then take the tram back up & do it again! Our 5th run was probably the most hilarious as I had to return my sled at the top, so all 3 of us piled onto 1 GT, with the 4yr old steering & me trying to keep it going straight rather than towards every jump… which ultimately caused us hurtling into a pile and laughing uncontrollably. Was a much needed escape…as laughter is always the best medicine :) 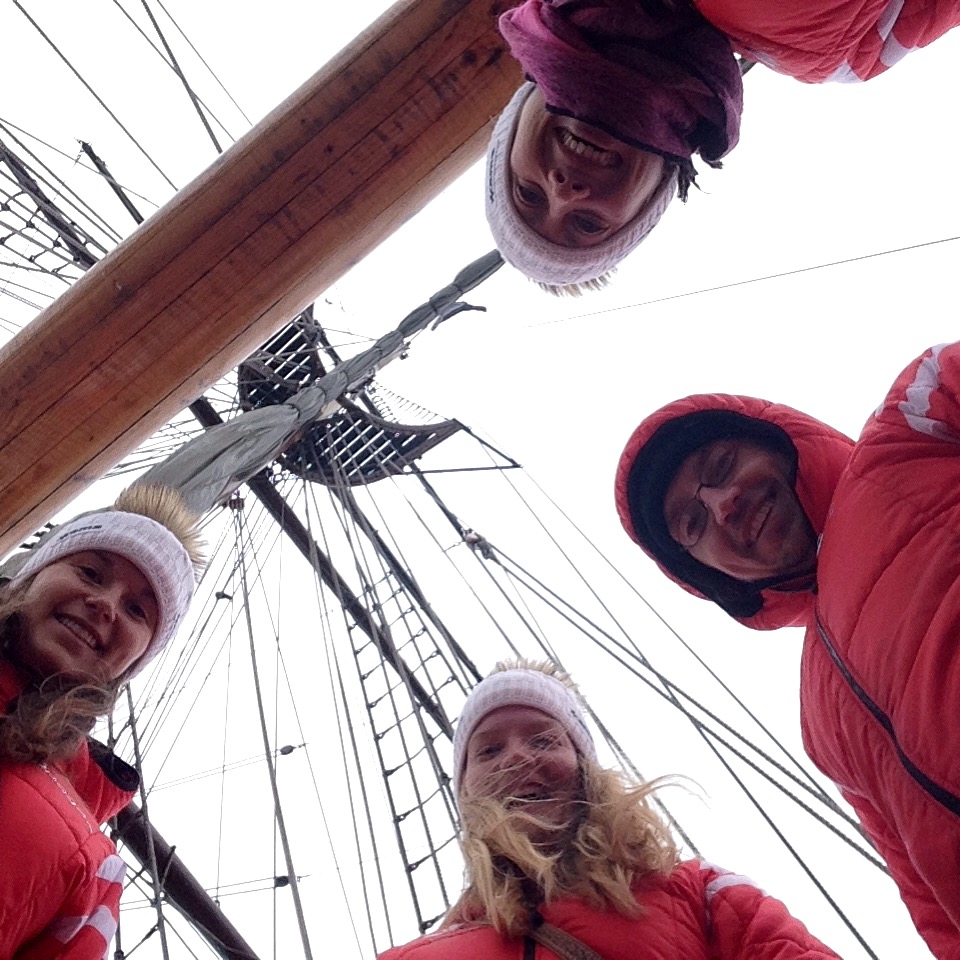 One of my goals this season was to make the WCHS team. Never one to set my sights low, I didn’t want to just be there. I wanted to be in my best shape of the year to give myself the chance to be in contention with the top. I raced in 3 races. I put my heart and soul on the line and fought with what I had that day. And unfortunately, I came out short of my hopes and dreams and not really satisfied. Actually after the relay, more like devastated. “It’s only sport,” I told myself. “It’s only a game.” I didn’t die and I’m not starving…the perspective philosophy. But the post-race moment when it sinks in, when you’ve put yourself out there to perform and then you crumble, it’s not a good feeling! If you were not looking at results, I’ll just briefly sum it up, that the rest of my team had stellar legs in the relay, and then in my anchor leg I dropped multiple positions & did 3 penalty laps. I can assure you, that was a devastating feeling, and not exactly the way I had envisioned finishing my career! Two word explanation would be anxiety attack. The moment I missed a target, anxiety took over. I struggled to pull normalcy back and just let things flow. Despite having a whole slew of strategies for maintaining a focused calm state for racing and shooting, nothing seemed to be working. I finished the race feeling like a piece of shit and a complete let down for the team. Tears flowed and it took a long while to just let it go. I was a bit more relieved a couple days later when I talked to a high profile athlete on a different team and realized I was not alone! (Imagine that! And I know there’s many others out there ;p) For me skiing came easy, putting my head down and pushing myself was something I just did. Shooting on the other hand, I’ve always had to work at. Sometimes it flowed and other times not at all. For both of us, there are times when entering the range becomes a place we dread. We shared the same thought that sometimes we’d much rather just ski right through the range. Just out for a ski guys…Oh but cross country’s so boring, right?!

In the end it’s also important to remember reality, back to the perspective philosophy. It’s just a few targets after all. This isn’t life or death. It’s not real life Hunger Games. My last race doesn’t define who I am as a person or define my career. It’s an amazing feeling to put it all together and achieve goals, podiums, and prizes. I like that feeling. Who doesn't? I enjoyed and savoured those moments in my career. That’s part of what drove me to work hard year after year. But this post isn’t about my retirement. That’s coming up. I’ll leave it for now with this quote because if there's one thing I've learnt ... when you fall hold on to who you are, your unique brilliance, the love you experience and share, your strengths and remember…

'Attaining lasting happiness requires that we enjoy the journey on our way toward a destination we deem valuable. Happiness is not about making it to the peak of the mountain nor is it about climbing aimlessly around the mountain; happiness is the experience of climbing toward the peak.' -- Tal Ben-Sharah